“Our industry’s reaction to the changes affecting us here in Asia Pacific will define its fortunes over the next 10 to 15 years.”

In his opening address at the 2016 TFWA Asia Pacific Conference, president Erik Juul-Mortensen said that while the duty free and travel retail business has enjoyed phenomenal growth in the Asia Pacific region, new realities were creating new challenges and the sector is coming under pressure.

Juul-Mortensen cited a number of macro factors that are affecting how the industry is perceived by passengers, as well as their attitudes to travel and tourism.

The first of these is financial, stemming from volatility in exchange rates. Shifts in the relative values of key currencies are affecting retailers’ ability to offer value and in some places, damaging the perception of brands in duty free stores.

The geo-political equilibrium in Asia Pacific is undergoing a slow but perceptible shift towards more regional self-assertion of territorial influence. Meanwhile, the threat of terrorism is causing huge problems for tourism. According to Forward Keys, for example, the recent attacks in Brussels prompted a 21% drop in planned international arrivals in Paris globally, a figure which rises to 23% in travellers from the US, and 41% in Chinese travellers. More burdensome, timeconsuming and costly airport security could well be introduced to combat this threat, reducing precious airside dwell-time.

The industry also needs to recognise the importance of Millennial travellers. The strong growth the industry has enjoyed will only be revived if we adapt to the expectations of a new, very different generation of travellers. Conspicuous consumption is not for them, and they are immune to the power of the brand logo. They are influenced by their peers, not marketing. This raises questions about how to make our offers relevant to them.

For the first time since 2009, global duty free and travel retail sales fell. According to preliminary figures from Generation Research, sales in 2015 totalled US$62 billion, which was 2.3% down on the previous year. Asia Pacific did however buck the trend, and the region performed just ahead of the global average. At just over US$25 billion, sales were up 2.6% compared with 2014. However that figure contrasts sharply with the high growth of 25.5% recorded in 2011. Airports remain the biggest duty free channel worldwide, accounting for over half of all sales. The picture is the same in Asia. Noteworthy is the fact that the only channel to record growth in Asia and across the globe is the ‘other’ category, which includes downtown, border shops and cruise.

The industry’s failure to capitalise on passenger growth is a concern. In Asia Pacific, passenger numbers were up 9.1%, but airport sales fell by 1%, indicating that spend per passenger is significantly down.

There must also be greater transparency and improved dialogue between brands, retailers and landlords, alongside the flexibility in those relationships to adapt to sudden change.

Although there will always be an appetite for luxury brands, we need to remember that for the millennial traveller, luxury is also about service, experience and individuality.

Juul-Mortensen believes that the efforts made by the duty free industry can only be effective if underlying prospects for travel are positive and there are plenty of reasons to be optimistic. He quoted recently published statistics from PATA - the Pacific Asia Travel Association, that showed that foreign visitor arrivals into the 38 Asia Pacific destinations they analysed will exceed 550 million in 2016. If achieved this would be a 5.4% increase over last year.

The World Tourism Organisation’s projected rates of growth for Asia Pacific while not forecast to be as strong as the past five years, are also still positive, while there also are many plans for airport development across Asia Pacific.

In conclusion, Juul-Mortensen said that slower growth may now be the norm as the Asia Pacific market reaches maturity, and the time when the industry could rely on the region to deliver higher sales may be gone. It is however the way the industry reacts to the changes affecting it in Asia Pacific that will define its fortunes in the coming years. 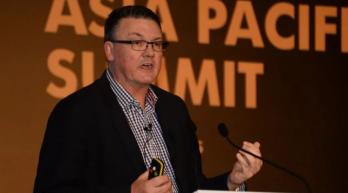