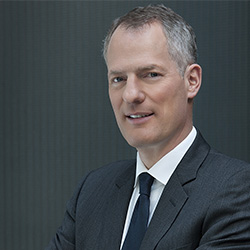 Philippe Schaus is Chairman and Chief Executive Officer of DFS Group, and a member of the LVMH Executive Committee.  He joined DFS in 2011 as Group President, Merchandising and Marketing, and was appointed to his current role in 2012.

Philippe began his career in 1987 as Assistant Treasurer at JP Morgan & Co in Brussels. In 1990 he moved to The Boston Consulting Group as a Senior Consultant. In 1992 Philippe was named International Commercial Director of the German Porcelain Tableware Division at Villeroy & Boch, and was appointed Managing Director of that division in 1999.

In 2003, Philippe joined Louis Vuitton, part of the LVMH Group, as President of the Europe Zone. He was appointed Senior Vice President International in 2006 and became Executive Vice President in 2009.

Philippe graduated in 1987 from The University of Liège, Belgium, as an aerospace engineer and received an MBA from INSEAD, Fontainebleau, in 1990.