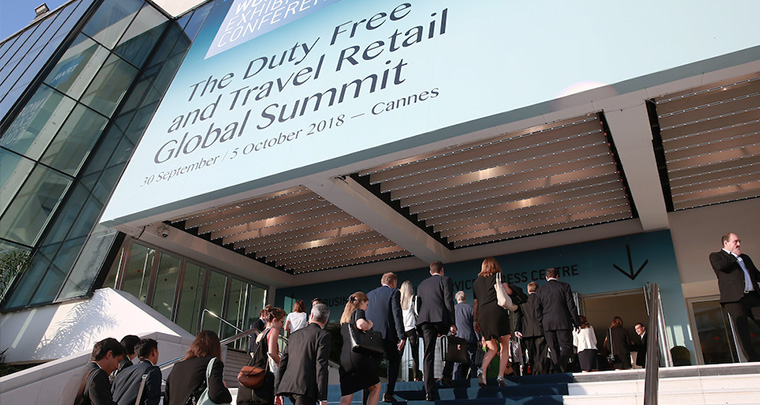 Taking to the stage for the last time in his capacity as president of TFWA, Erik Juul-Mortensen reflected on his 34 years of involvement in the organisation. In 1985, the first Tax Free World Exhibition housed 449 brand-owning companies, covering 6,000 square metres of space and welcomed almost 3,000 visitors, he stated. This year however visitor numbers topped 7,000 for the first time, and there was over 22,500 square metres of exhibition space.

Moving on to the latest data from Generation Research on recent performance of the industry, he said that the global duty free and travel retail industry recorded close to double-digit growth in 2017. Total sales reached 69.3 billion US dollars, an increase of 9.5% on the previous year.

Once again, it was Asia Pacific that was at the heart of this growth. Last year the region posted growth of 12.6% and exceeded 30 billion US dollars in sales, bringing the region ever closer to representing half of global duty free and travel retail sales. But very encouraging numbers were also recorded elsewhere in the world. Europe, the Middle East and the Americas all posted growth of over 7%.

However, the industry is not without its challenges, and as his generation takes a step back, Juul-Mortensen said it is vital that a new one steps forward to fight the battles to come. “To paraphrase John F Kennedy: ‘ask not what your industry can do for you, but what you can do for your industry’.

The second morning session of conference took the form of a lively and sometimes provocative panel session. When asked how they were feeling about the future of the industry, the mood of the panel was decidedly upbeat.

Claus Heinemann, co-owner of Gebr Heinemann said that while double-digit growth might not continue, duty free and travel retail is still a very stable industry. Dag Rasmussen, CEO and chairman of Lagardère Travel Retail did not believe that growth was only happening because passenger numbers are growing. He said while the passenger mix is evolving, if we look at the fundamentals, the business itself is also indeed growing. Julián Díaz, CEO of Dufry said that the Golden Age of duty free is far from over, and that we have access to a number of marketing tools the high street simply can’t utilise. Moving on to the topic of the trinity, the panel was universal in their agreement that the issue was problematic.

Looking at how to create a differentiated experience, Rasmussen argued that stocking local products was a good way to maintain appeal. Susan Whelan, Senior Executive Vice President of King Power International stated that we need to remain relevant to the next generation of travellers, and ensure we leave space for new brands and new experiences.

Díaz believes that the travel industry is very active in its attempts to understand the customer and much research has been conducted into price sensitivity and other buying behaviours. Digitalisation will enable us to adapt the retail offer to new requirements.

Looking to the future, Rasmussen said that green issues would rise up the agenda, while Díaz spoke of travel retail as a channel between online and the high-street benefitting from a ‘captive audience’.

The TFWA Conference ended on an inspiring note. Anders Fogh Rasmussen, former Prime Minister of Denmark and former Secretary General of NATO, said that for a long-standing free trader like him, speaking to an audience of tax free professionals was a particular pleasure. The duty free and travel retail industry is one of sunshine and blue skies. But what he called the ‘foolish’ policies of political leaders is one cloud that could cause a storm. The current disorder of our world, American isolationism and growing nationalism are all a threat.

The consequence of this ‘foolishness’ will be economic decline resulting from trade wars, a crisis of democracy and the decline in the status and influence of Europe. It is the autocratic systems that will benefit.

To counter this we need to restore American global leadership, ensure that democracy is preserved, and democratic leaders must deliver to close the gap between the elite and those left behind. Rasmussen ended by quoting Roosevelt. To maintain international law and order, he said, it’s important to speak softly, but carry a big stick.

Adventurer and scientist Bertrand Piccard, who made history when he and his co-pilot and sponsor André Borschberg flew around the world in an entirely solar-powered plane, ended the conference with a rousing appeal to all to consider how we can be more imaginative in our approach to our futures and make it possible to turn a dream into a reality. Firstly, we should not wait for widespread support, but take the plunge and start a project; then we will be compelled to carry on.

Piccard said we should not surround ourselves only with people who agree with us, as we need to learn from those around us. We must ask ourselves what is the story we would like to tell.

Early risers were able to share some of the latest thinking on the challenges and opportunities of the digital environment at Tuesday’s TFWA Digital Focus workshop. Kicking off the debate, Shi Ling Tan – Global Digital & Media Marketing Manager of Shiseido Travel Retail cited Shiseido Group President and CEO Masahiko Uotani’s vision to digitalise the company and to become the most digitally exciting beauty company by 2020. She also spoke of how the trinity could be extended to include others such as hotels and airlines.

Mondelēz World Travel Retail Head of Category Planning Ivo Knuesel stated that shopping no longer has the monopoly on travellers’ attention when they are at the airport. However, he believes that confectionery, as the key impulse category, has a major role to play in connecting with customers. He also spoke of the importance “phygital” retail, which blends the physical and digital, as well as “retailtainment”.

Jérôme Lepage, Marketing & Business Development Director of JCDecaux detailed how his company had experienced a massive growth in digital revenues, with digital revenue in the airport space rising from 18% in 2013 to 28% in 2017. Data is key to success, and to be most effective, this must be based on co-operation between all elements of the trinity.

The session concluded with an update from ETRC Deputy Secretary General Julie Lassaigne, who explored the impact of increasing legislative demands for product information. It is, she stated, impossible to meet local language requirements on the label, the requirements on the supply chain are onerous, and travel retail exclusives are being placed at risk. She then went on to detail ETRC’s pilot for a digital platform which would allow consumers to access essential information via a mobile device.

TFWA Managing Director John Rimmer opened Wednesday morning’s Inflight Focus Workshop by sharing the latest data from Generation Research, which painted a rosier picture than in recent years. In 2017 inflight enjoyed growth for the first time since 2012, and sales increased by 4.2% to over US $2.5 billion.

Stephen Hillam, Research Director, Counter Intelligence Retail (CiR) shared the findings of a new study commissioned by TFWA into the channel. Conversion remains an issue – only a third of travellers browse inflight and, of those, only 36% go on to purchase. The inflight shopper is also becoming older, and while in 2015, 56% of shoppers were over 35, today 70% of those buying inflight are over 40 years old, which is a potential threat.

And yet inflight has many perceived advantages. 46% of inflight shoppers say it is convenient, 31% say it offers better promotions and 28% cite the advantage of not having to queue. Hillam stated that enhancing service, optimising the range and offering the option to pre-order were key in developing the channel.

Joe Harvey, Senior Manager Global Boutique Development at Retail inMotion, said the most important thing the channel has been missing is excitement. Harvey suggested that the reason why we have seen growth for the first time in five years is because we have forgotten about the product, but this is where we have now seen a difference.

Thabet Musleh, Vice President at Qatar Duty Free, stressed the importance of inflight, and said that in his business inflight sales were up 19% at a time when passenger numbers had increased by 9%. Staff members are an important part of the mix, he said, and his company is investing heavily to ensure that inflight is part of the service and not an ‘extra’. It is important to remember that, while digital is important, a significant number of passengers are not digitalised.

The first TFWA Digital Village Pitch Corner offered those in the audience a fascinating glimpse of the future of duty free and travel retail. First to the podium in the specially organised session hosted at the Palais des Festivals was Neil Muir, MD of digital experiences company Blynk. He was followed by Chris Morriss and Duncan Craig of Concourse Display Management, who spoke of ‘actual reality’ and how to bring the digital and live world together.

Customer experience agency Albatross CX kicked off the second session of the day by presenting their CX App, a tool to help retail teams improve the customer experience. There was much exploration of digital inflight shopping solutions from SKYdeals and airfree, as well as how to target potential shoppers at different points on their travel journey from Iconiction and IMM.

Sampling Innovations Europe impressed attendees with Self Sampling®, a fully automated system that dispenses a single fragrance or make up sample at the touch of a button. Merging the physical and digital worlds via NFC tags was the topic of focus for Thinfilm, while Aircommerce talked delegates through Airportpopup.com, a digital marketplace for matching available space for temporary experiential retail with brands looking to ‘pop up’ at airport locations.

Day two of the TFWA Digital Village Pitch Corner was opened by Global Smiling, who highlighted the fact that digitalising is still at an elementary stage in travel retail, and urged the audience to take more interest and start to exist in the digital world. Mydutyfree’s Katerina Furtak then took to the stage to highlight the advantages of her company’s digital marketplace for travel retail, while Janghwan Kim talked the audience through OLLDU, an online service platform for global, duty free shopping and reservation.

iCoupon drew attention to the considerable cost of handling paper vouchers and the advantages of replacing these with digital solutions, while Skyra spoke of positive disruption in the duty free and travel retail industry and how it could benefit the business.

The afternoon session began with DutyFreeList who explained how duty free and travel retail was moving from impulse to planned purchase, and how pre-order and collect offered new opportunities. 4DShopper demonstrated how it replicates a physical duty free store with a virtual alternative, while Dr. Banner Airport explained how to create hyper-targeted online advertising.

Next up was Handy, a mobile system that helps hotel guests get the most out of their stay. The Moodie Davitt Report outlined the company’s approach to tailoring a promotional offer to make it as relevant as possible. The last technology to be showcased was a new capability from Sniffy that enables brands to create promotions that appeal to all five senses. 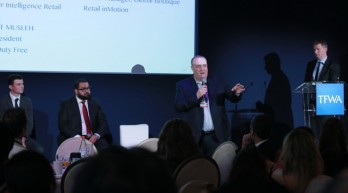 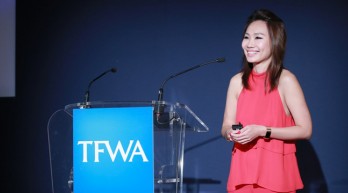 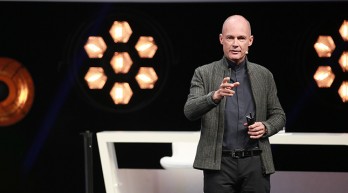 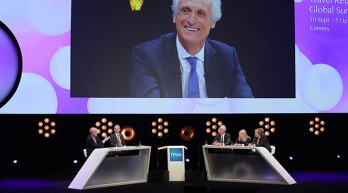