History, Culture and Art of Living… A place where civilizations meet. The country will surprise you even more!

Duration of the tour: around 5 hours
Tour Price: US$35 per person
Entrance fees to the National Museum included

The national museum; the collection began after World War I, and the museum was officially opened in 1942. The museum has collections totaling about 100,000 objects, most of which are antiquities and medieval finds. About 1300 artifacts are exhibited, ranging in date from prehistoric times to the medieval Mameluk period. During the 1975 Lebanese Civil War, the museum stood at the front line. Its collection suffered extensive damage in the war, but most of the artifacts were saved. Today, the National Museum of Beirut has regained its former position, especially as a leading collector for ancient Phoenician objects. 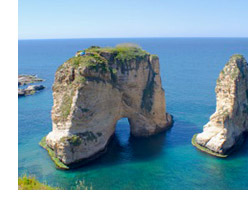 Ride through Raouché, a residential and commercial neighborhood known for its upscale apartment buildings, numerous restaurants, and cliff-side cafes that line Avenue de Paris, which forms part of the Corniche. The corniche is popular on weekends and evenings where strollers and joggers crowd the pavements.
Off the coast of Raouché, the Pigeons' Rock a natural landmark with two huge rock formations, stands like gigantic sentinels; popular destination for locals and visitors alike. 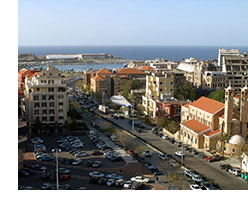 Downtown Beirut: visit the Cathedrals of St. George and St. Elias, Mohamed el Amine Mosque and pass by the Roman Ruins. Explore Beirut down town with its constructions built during the French mandate and restored starting 1993.

Souks of Beirut: a stroll around the myriad boutiques, shops, and restaurants in the downtown area.

Break in Zaitouna Bay with a Marvelous view of the coast.

Duration of the tour: around 9 hours
Tour Price: TBA 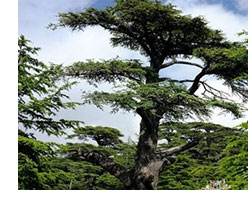 The Cedars of Lebanon are one of the main tourist attractions. The forest has been mentioned and referred to many times in the Bible; its rich history has made this area one of the most important tourist destinations in the Middle East. Today, it is a preserved area and is being turned into an open art museum through the work of artist Rudy Rahme who is transforming dead cedar trees into Art. Nature lovers will find paradise on earth in this region endowed by breathtaking landscape and natural wonders for the eye. 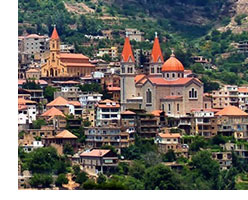 Bcharreh village, located at 7 km from the ski station, at 1450m above sea level is the birthplace of the famous Lebanese poet Gibran Khalil Gibran, the author of The Prophet. This town is famous among other things for Gibran Museum, located at the entrance of the village, in the forest of Saint Sarkis, next to ancient monasteries.

Kozhaya is part of the Holy valley where Maronites used to live during the Ottaman's period. Monastry of St-Antoine of Kozhaya is one of the numerous monasteries built in this valley. It is built partly inside in the mountain and party outside it. It is surrounded by a very beautiful panorama of forest and valley. 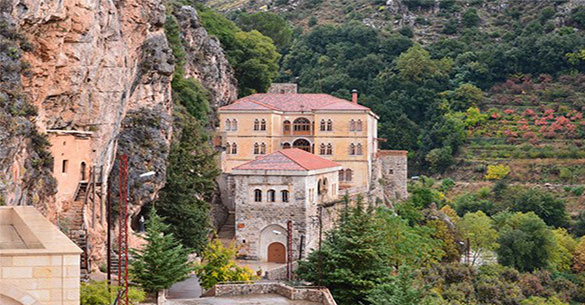 Duration of the tour: around 8 hours
Tour Price: US$85
Entrance fees included to Jeita Grotto, cable car and lunch

Jeita Grotto, the largest cave in Lebanon, first discovered in 1836; nominated for the seven world wonders. Jeita is one of the world's most beautiful cavern.The lower caverns are visited by boat over a subterranean lake 623 meters long. A dry upper gallery can be seen on foot. 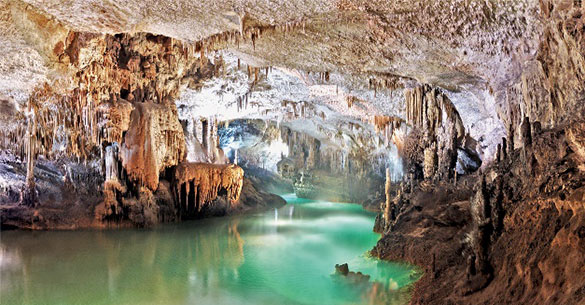 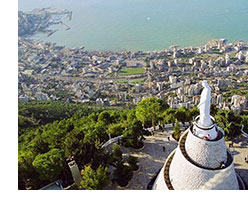 600 meters above sea level and 26 km away from Beirut, with a wonderful panoramic view covering the Bay of Jounieh. Statue of the Virgin Mary was erected in 1908. Inside its base, a chapel with outside spiral staircase that leads to the top,
You will take the cable car to the magnificent Jounieh Bay. 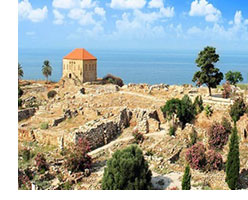 Byblos is a mix of sophistication and tradition. One of the oldest towns in the world goes back at least 7,000 years.
Under the domination of the Egyptian pharaohs in the 3rd and 2nd millennia B.C, Byblos was a commercial and religious capital of the Phoenician coast. It was in Byblos where the first linear alphabet, ancestor of all modern alphabet.
This busy modern town located at 36 kilometers north of Beirut, has the “Roman Medieval port” as its main tourist hub. The landmarks in this area are: the crusader castle and church as well as the extensive remains of city’s past - from Neolithic times to the crusader era. A beautiful Mosque adds to the cultural mix in the old part of Byblos. And all around a diversity of cafes and restaurants can be found. 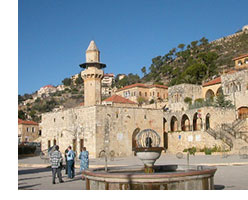 Deir Al Qamar: the capital of Mount Lebanon, located 35 km away from Beirut, now it is a typical Lebanese village with its historical center, souk (market), museum, mosque & churches. Deir El-Qamar is an open-air museum. 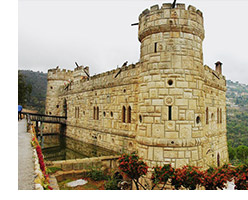 Moussa Castle is symbolic for Lebanon’s traditional way of life and moments in history. Animated scenes and statues depicting Lebanese culture comprise three floors of the castle, while the other two floors hold eastern and Arabic weapons collections that date from as recently as 1945 to more than 4000years old. 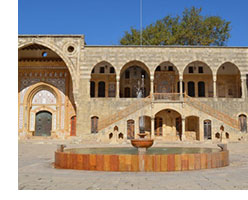 Beiteddine, a magnificent palace built at the beginning of the 19th century by Emir Bechir II, who reigned over Lebanon for more than 50 years. With its arcades, galleries and rooms decorated by artists from Lebanon, Damascus and Italy, this building is a model of eastern architecture.
Today the palace houses a museum of feudal weapons, costumes and jewelry as well as an archeological museum and a museum of Byzantine mosaics

Duration of the tour: around 9 hours
Tour Price: US$75
Entrance fees included to Baalbeck, Anjar Temple and lunch

Heliopolis: the roman temples of Baalbeck, located in the Bekaa valley 85 kilometers away from Beirut. It makes up the largest and best preserved corpus of roman architecture left around. The acropolis occupies the top of an artificial hill built up of different layers of habitation. Its temples, dedicated to Jupiter, Bacchus and Venus, were constructed between the first and the third centuries A.D.
In the “Jupiter temple”, six of the 54 giant columns that originally surrounded the sanctuary, survived till date. The temple has an impressive podium and a vast rectangular courtyard where sacrifices were carried out. The sanctuary is reached through a propylaea (monumental entrance) and hexagonal forecourt.
The town of Baalbeck has major remains from Islamic times including the grand Mosque, built by the Ommayadds with material borrowed from ancient monuments, and another mosque built in Mamluke times near the spring of Ras El–Ain.

Anjar is located in the Bekaa valley, 58 km away from Beirut. It was built by the Omayyad caliph al- Walid Ibn Abdel Malek in the early 8th century A.D. Inside the city’s strong fortifications are the remains of streets, three palaces, souks, two hammams and a Mosque. 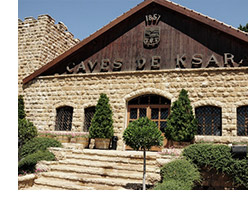 Ksara: Built during the Roman period then covered by sand for centuries, the Ksara caves were found by mistake in 1898 by the Jesuites who were looking for a wolf that was eating their chicken every night and was using the caves a refuge.
It is now the refuge of the well-known Ksara wine where thousands of the old wine bottles are preserved. A tasting of the best wines is done during the visits.