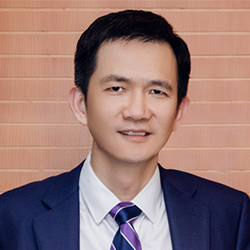 Dr Yao Yang is a Cheung-Kong Scholar and Boya Chair Professor at the China Center for Economic Research (CCER) and the National School of Development (NSD), Peking University. He currently serves as the Director of CCER, the Dean of NSD, the Executive Dean of the ISSCAD, and the Editor of CCER’s house journal China Economic Quarterly. Dr Yao’s research interests include economic transition and development in China, and his research has been published in numerous international and domestic journals. He has also authored several books on institutional economics and economic development in China.

Dr Yao is an active member of the China Economist 50 Forum. He is also a prolific writer for magazines and newspapers, including the Financial Times and the Project Syndicate.

In 2008 and 2014, Dr Yao was awarded the prestigious Sun Yefang Award in Economic Science. In 2008 and 2010, he received the Pu Shan Award in International Economics and the 2008 Zhang Peigang Award in development economics.

Dr Yao obtained his Bachelor’s degree in Geography in 1986 and a Master’s in Economics in 1989, both from Peking University. He received his Doctorate in Development Economics from the University of Wisconsin Madison in 1996.