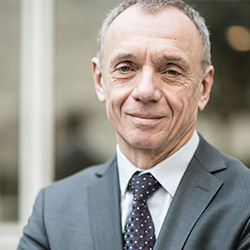 Alain Maingreaud joined TFWA in 1995 as Commercial Director, tasked specifically with developing the Association’s Asian activities. He was closely involved in the early development of the TFWA Asia Pacific Exhibition & Conference, which is now held every May in Singapore.

Following promotions during the following decade, he has in recent years supervised all TFWA events across the world. This includes the organisation of the biggest show in the duty free and travel retail industry, TFWA World Exhibition & Conference, which has been held in Cannes every October since 1984. Alain played a pivotal role in the addition of the TFWA Digital Village technology exhibition to the programme. He was also instrumental in the conception and launch of the TFWA China’s Century Conference, first held in 2013.

Alain was named Managing Director of TFWA in 2010, and in December 2018 was elected as TFWA President.