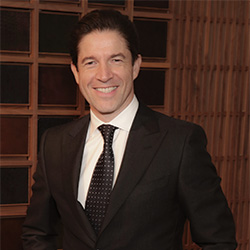 He joined Bally in November 2013, bringing with him over twenty three years of international luxury experience. Taking on the challenge of turning the brand around, de Narp hired a new executive team, including Design Director Pablo Coppola, with whom de Narp has successfully redefined Bally’s branding and design direction.

Frédéric has a clear retail strategy for Bally, securing prime locations in key global hubs: London, New York, Los Angeles, Tokyo and Beijing. He began a collaboration with David Chipperfield Architects to define an innovative and singular concept for a new retail experience, which was first previewed in 2014 at London’s New Bond Street flagship store.

Prior to his appointment at Bally, Frédéric led the successful turnaround of Harry Winston Inc, the American jeweller and watchmaker, nearly doubling its sales over three years and returning the brand to profitability. These successful brand-building and commercial achievements contributed to the billion-dollar acquisition of the company by Swatch Group in March 2013.

Frédéric began his career at Cartier International in Japan in 1991, assuming roles of increasing responsibility from Sales Associate to Manager of the Ginza flagship store in Tokyo. He then held a series of senior leadership assignments in Switzerland and Italy, becoming CEO of Cartier Italy before taking over as President and CEO of Cartier North America in 2005.

A member of the Committee Encouraging Corporate Philanthropy (CECP), Frédéric serves on the board of the Elie Wiesel Foundation for Humanity and Life Project for Youth.

Born in Brittany, France, he holds a Masters’ degree in International Business from Le Havre University and lives in London with his wife and seven children.