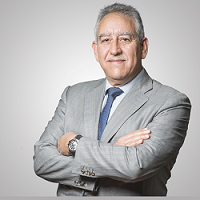 Samer A. Majali is the founder of Plane Vision, a Bahrain-based consulting firm specializing in corporate strategy and business advice. Prior to this, Samer served as Chief Executive Officer of SaudiGulf Airlines and President of Al Qahtani Aviation and Abdel Hadi Al Qahtani Group from 2013 to 2019.

An active member of various international organizations in the aviation industry and beyond, Samer is a Fellow of the Royal Aeronautical Society of the UK and Chartered Engineer of the Engineering Council. He is also a Board Member of the Central Bank of Jordan and a member of the country’s Engineers Association. He has also served as Chairman of IATA’s Board of Governors, of the Gulf Hotel Group, Arab Air Carriers Organization (AACO) and the International Flight Catering Association (IFCA).

Samer received his Master of Science degree from Cranfield Institute of Technology in the UK, where he received the prestigious Lloyds Aviation Economics Prize. >