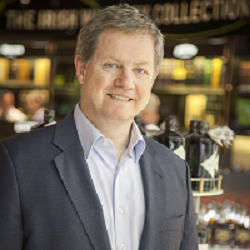 Jack MacGowan joined the Dublin Airport Authority (DAA) in 2005 from Tesco plc.  He held the role of Chief Commercial Officer, with responsibility for all commercial operations in Ireland including retail, car parks, marketing and property concessions.  In August 2011, he was appointed Chief Executive Officer of Aer Rianta International, with responsibility for all retail activities globally.

Prior to joining DAA in 2005, Jack worked with Tesco, first as Head of Marketing for Tesco Ireland and later as Non-Food Marketing Director in the UK. Jack’s other career roles include general management positions at Diageo and serving with consultants, McKinsey & Company. He holds an MBA from Wharton University, and is married with two children.