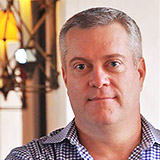 Porter Erisman is an entrepreneur, e-commerce consultant and award-winning filmmaker with more than 20 years of experience in China.

From 2000-2008, he served as Vice President at Alibaba Group as the company grew from a start-up in founder Jack Ma’s apartment into the world’s largest e-commerce company. Based in China, Porter at various times headed Alibaba’s international marketing, website operations and corporate affairs.

After leaving Alibaba, Porter produced and directed Crocodile in the Yangtze, an independent documentary film about his experience inside the company. The film screened at twenty film festivals worldwide garnering several awards, including Best Documentary at the San Francisco United Film Festival and Best Film on Entrepreneurship at the Silicon Valley Film Festival.

Porter has spoken at conferences around the world and has been featured in leading media, including The New York Times, Wall Street Journal, CNBC, Bloomberg, NPR and the BBC. He is also the author of Alibaba’s World: How a Remarkable Chinese Company is Changing the Face of Global Business.

Since leaving Alibaba, Porter has remained involved in start-ups in developing countries, consulting to e-commerce companies in India, Nigeria, China and Vietnam.