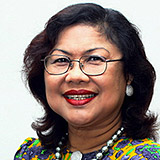 Tan Sri Rafidah Aziz is one of South East Asia's most dynamic and respected politicians, and is regarded as an authority on global trade. She is Malaysia’s longest serving Minister of International Trade and Industry, having been in the position for 21 years from 1987-2008.

During her tenure as the Minister of International Trade and Industry, she contributed significantly to the development of Malaysia’s economy, and worked tirelessly to position and to promote Malaysia as the most favoured destination for foreign direct investment.

Under her leadership, many multi-national corporations such as Intel, Western Digital, Panasonic, Samsung set up manufacturing, research and development facilities in Malaysia. The country is now the 20th largest trading nation in the world and the largest exporter of semi-conductors. On the domestic front, she strived to create opportunities for local enterprises to excel in their markets. Trade agencies such as SMIDEC, now known as SME Corp and Matrade, were set up. The establishment of SMIDEC was in recognition of the need for a specialised agency to further promote the development of small and medium industries (SMIs) in the manufacturing sector through the provision of advisory services, financial assistance, infrastructural facilities, market access and other support programmes.

Through her concerted efforts and passion in promoting Malaysia's trade, many businesses have emerged from small medium enterprises to become large corporations with offices around the world. The local media dubbed her as 'Rapid Fire Rafidah' for her forthright opinions and wit. Her expertise, visionary outlook and confidence have been a source of inspiration to many entrepreneurs in Malaysia and beyond. Known as the “Iron Lady from Kuala Kangsar”, she is in her element when it comes to tackling trade negotiations or promoting the attributes of Brand Malaysia.

She continues to monitor international trade and investments as patron of the Malaysia-Europe Forum and as the Chairman of the fast growing airline AirAsia X.