News
Post date
Monday 17 December 2018
Beirut played host to a memorable MEADFA Conference that stood out for the quality of its presentations as well as the warmth of its hospitality.

Held under the patronage of H.E Saad Hariri, Lebanese President of the Council of Ministers, the latest MEADFA Conference proved one of the most memorable of recent times. 442 delegates gathered at the landmark Phoenicia Hotel overlooking Beirut’s Mediterranean shores, a strong turnout for an event held outside Dubai where many regional players are based. Over 20% of those attending were from operators or landlords, with the Middle East and Europe both well represented.

After welcome addresses by MEADFA President Haitham Al Majali and H.E. Avedis Guidanian, the Lebanese Minister of Tourism, delegates heard from world-renowned fashion designer Elie Saab. Talking candidly about the highs and lows of doing business in the region, Mohamed Zeidan of Phoenicia Trading Company underlined the Lebanese traveller’s importance to airport retail. Middle East Airlines Chairman & Director General Mohamad El-Hout spoke about the Levant aviation market in a presentation full of insight and humour. Other well-received sessions in the two-day programme included analysis of Africa’s airports, discussion of the region’s inflight market and ensuring it not only survives but prospers, briefings on the regional economy and business context, an intriguing glimpse of what new technologies like blockchain can do for travel retail, and an update on travel and emerging consumer trends across the Middle East and Africa.

The networking events at the Conference proved particularly successful. Sunday night’s Opening Cocktail at the Eau de Vie restaurant blended a vibrant ambiance with excellent food and drink, courtesy of Aphrodite Duty Free. The Gala Dinner on Monday was hosted by Beirut Duty Free and held at Beirut’s Music Hall, an intimate venue renowned for its live performances. Guests enjoyed an unforgettable evening of Lebanese joie de vivre to a soundtrack of local and Cuban music that had guests dancing late into the night.

View a breakdown of the Conference attendance figures 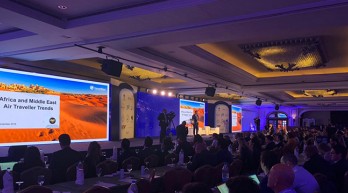