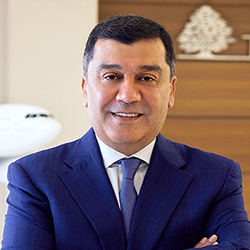 Mohamad Abdul Rahman El-Hout was born in Beirut in 1959. He holds a Bachelor degree in Economics and a Master’s degree in Business Administration from the American University of Beirut.

He started his professional career at the Central Bank of Lebanon in 1981 and has been the Chairman of the Middle East Airlines Board of Directors since 1998.

He is a member of the Board of Governors of IATA and of the Executive Committee of the Arab Air Carriers organization, and has presided over many professional bodies.

He led the Middle East Airlines-Air Liban restructuring plan after the company had incurred serious losses over two decades, and under his leadership the company became profitable in 2002 and has remained so over since.

He is the Head of the Social Reform Association, a founding member of the Board of Trustees of ESA Business School, Rafic Hariri University, Dar Al AJAZA and Al Makassed Association.

Mr El-Hout has been granted honours by a number of different countries, including Lebanon, France, Italy, Belgium and Brazil. He has also been granted an honorary doctorate from Beirut Arab University.