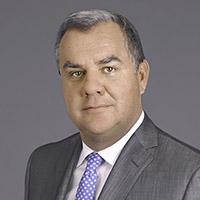 Prior to joining the GTAA, Mr. Collier was the Chief Operating Officer at PepsiCo Beverages Canada based in Toronto. During his tenure with PepsiCo Beverages, Mr. Collier held a number of senior sales and operating positions across Canada and internationally. His assignments included Vice-President Retail Sales in Columbia, Maryland, and Vice-President and General Manager in México City.

Mr. Collier received his M.B.A. from the University of Windsor and his B.A. Economics from Queen’s University in Kingston. Mr. Collier is currently a member of the Oakville Hospital Foundation’s Board of Directors.