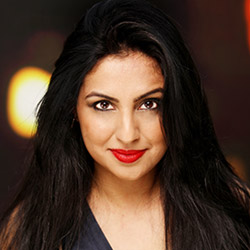 Shivvy Jervis is a multi-award winning futurist, advisor and expert on the digital economy. She makes it her mission to uncover the most groundbreaking innovations that will transform our realities, and is currently authoring an ambitious book on the same theme. This will see her scouring the globe for the most powerful, purpose-driven advances of the next decade.

Shivvy has received more than 18 national and international accolades for her work, more recently including an Outstanding Achiever award at a ceremony held at the UK’s House of Lords and nomination from the public as a ‘Woman of the Year’. She has been recognised as one of Britain’s top digital influencers and one of Europe’s 30 leading women in tech.

Shivvy is the former creator and presenter of online video series Digital Futures, which attracted a global audience of over 11 million. It featured insightful debate and dialogue on emerging tech with industry pioneers and new founders. She also produced and fronted The Trailblazers, showcasing the next wave of digital pioneers, which averaged a 200,000+ audience per episode.

Shivvy demystifies some of the most complex technological concepts that will radically reshape sectors, industries and ultimately our day-to-day lives. She champions the notion of ‘tech-for-good’ and the role of digital as a catalyst and driver of meaningful value.
Shivvy serves as an advisor on two national councils themed around the future of work, diversity and digital skills respectively. She has a first-hand understanding of the industry, with a background as Head of Digital Media for the world’s third largest telco.