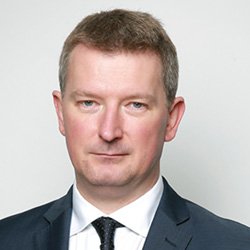 In September 2017 John was appointed Managing Director of TFWA, effective from October 1.